It was another brutal week for investors as global markets continued to sell-off. Concerns regarding the path of global central bank policy and a lackluster start of fourth-quarter earnings weighed on sentiment. Furthermore, it appears more likely that Russia will invade Ukraine as talks between the US and other NATO allies have yielded very little assurances. Comments made by President Biden on Wednesday seemed to concede an inevitable Russian invasion that induced wide criticism. At the same press conference, Biden also acknowledged that his “Build Back Better” plan was dead in the water but hopeful that some of the underlying initiatives could move forward.   The market’s technicals added fuel to the sell-off as the S&P 500 fell below its 200-day moving average. The economic calendar was light and highlighted by housing data.

The debate regarding global central bank policy paths continued to weigh on investors. The Federal Reserve meets next week and will announce its policy statement on Wednesday. Will the Fed appear more hawkish and push up its timeline to end QE and start rate hikes sooner than March, or will the Fed lean towards their prior policy statement, which has QE ending in March and the door open for a change in policy rates after that? Currently, there is an 84% probability the Fed will increase its policy rate by 25 basis points in March. As we have mentioned before, the divergence of Global Monetary policy will be an important factor to consider this year. China cut two prime rates this week and announced that it was likely that they would lower their reserve requirements, adding stimulus to their economy. 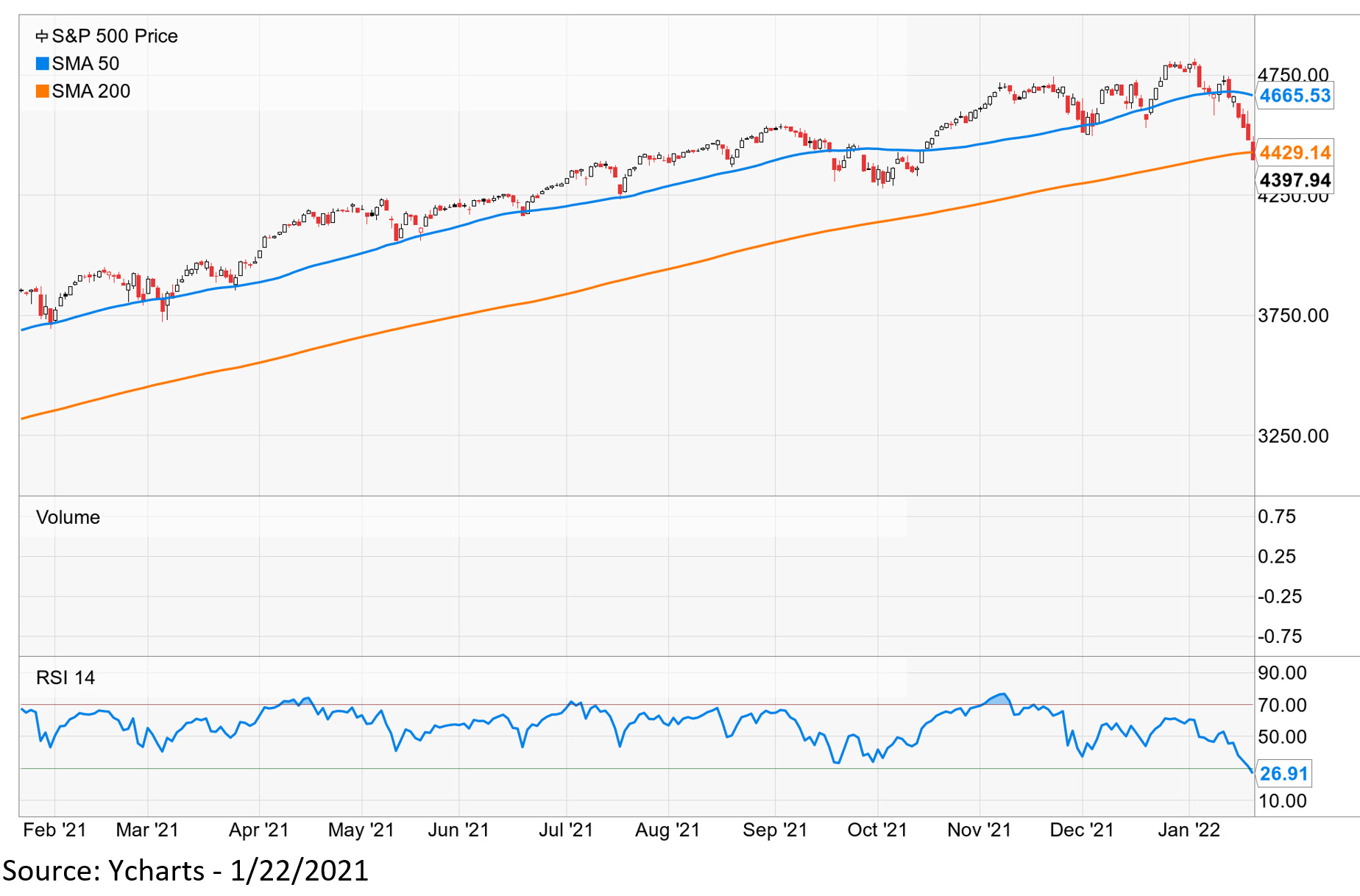 This week, fourth-quarter earnings provided very little help, even though the results were not that bad. Margin compression will continue to be a significant theme for earnings season. We have seen increased wages at many banks, increased content costs at streaming services companies like Netflix, and increased raw material costs at manufacturers. Stay tuned as earnings may be what helps turn the tide in the market.

It appears increasingly more likely that Russia will invade Ukraine. Talks between NATO nations and Russia have yielded very little, although they continue to leave the door open for further dialogue. The US has reportedly started to send weapons to the Ukrainian government to help against an invasion. Still, comments made by President Biden seemed to concede that a Russian move would only result in stiff economic sanctions. A conflict would have profound implications for the energy market, specifically on crude oil and natural gas. Interestingly, Russia banned the use of Cryptocurrencies this week, perhaps to thwart capital outflows prompted by the potential for international sanctions. Bitcoin lost over 17% this week as investors fled risk assets.

Technically, the market could not regain its 50-day moving average last week, which left the door open for more selling. Last year the market seemed bulletproof when testing the 50-day but buy the dip buyers have been absent in January. The S&P 500 closed just under its 200-day moving average for the first time since March 2020. Growth stocks have taken the brunt of this sell-off but appear well oversold here. If the selloff continues, it will need to bring in other parts of the market, which was apparent in last week’s sell-off. It is also worth noting that safe-haven assets got a bit of a bid last week, which was absent in the first two weeks of January.

Housing data highlighted economic data for the week. Housing Starts came in line at 1702k units while building permits exceeded expectations at 1873K. Existing home sales were a bit lite coming in at 6.18M versus estimates of 6.5M. Initial claims and Continuing claims regressed this week, most likely due to increased coronavirus infections. Initial claims increased to 286k while Continuing Claims increased to 1.635M. EIA inventories of Crude showed a build of 515k barrels and Nat Gas inventories showed a draw of 206 bcf.

Investment advisory services offered through Foundations Investment Advisors, LLC (“FIA”), an SEC registered investment adviser. FIA’s Darren Leavitt authors this commentary which may include information and statistical data obtained from and/or prepared by third party sources that FIA deems reliable but in no way does FIA guarantee the accuracy or completeness.  All such third party information and statistical data contained herein is subject to change without notice.  Nothing herein constitutes legal, tax or investment advice or any recommendation that any security, portfolio of securities, or investment strategy is suitable for any specific person.  Personal investment advice can only be rendered after the engagement of FIA for services, execution of required documentation, including receipt of required disclosures.  All investments involvement risk and past performance is no guarantee of future results. For registration information on FIA, please go to https://adviserinfo.sec.gov/ and search by our firm name or by our CRD #175083. Advisory services are only offered to clients or prospective clients where FIA and its representatives are properly licensed or exempted.